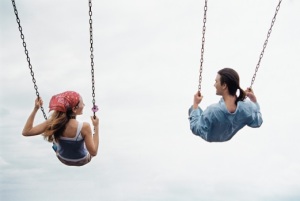 This will probably make you laugh, but i’m finally watching Swingtown. i know it was on tv years ago, but i didn’t watch it, don’t have cable, and really didn’t even know about it. i saw it on Netflix recently and the first disc came today. As i chuckled at Bruce and Susan’s foray into swinging, i realized that i’d never blogged about how i got started in this lifestyle. Great topic idea, i thought!

my story goes back further than just my initiation into swinging, as there are some things in my past that led me down this path. Without those things, i would probably have never gotten into this lifestyle.

During my first marriage i had an affair with a woman. She was an acquaintance through work and we had instant chemistry the moment we met. i had an inkling she was lesbian, but that wasn’t the attraction, she was just someone i connected well with. i was unhappy in my marriage, my husband and i were not connecting, and as we were working different schedules, i had a lot of time available to spend with my friend. One evening, i kissed her, and we became lovers. Most of my free time was spent with her, we even traveled together, my husband not suspecting a thing. She was a lesbian, not bisexual, in fact, she was totally adverse to penises or sex with men. She wanted me to leave my husband and have a committed relationship with her, but i was not able to do that. i was not ready for the social ramifications of that and, quite frankly, while i was not having sex with my husband at the time (he had lost all interest in sex), i knew i really enjoyed sex with men as well as women and couldn’t deny myself that. It was a horrible breakup for both of us, one of the hardest in my life, and i truly loved her. i never told my first husband about this affair as i knew it would destroy him, and still would, if he ever found out.

i eventually divorced this husband and had several sexual affairs with men. After a bit, i met my second husband. i had decided that i did not like that i had been dishonest in my first marriage and divulged my lesbian affair–i never wanted to be dishonest with a partner again. i was fearful that my truth would scare ex #2 away, but it didn’t, it excited him! He shared that he and his ex-wife had “fuck friends,” another couple that they played around with, and really enjoyed that. i had a million questions about that, didn’t understand it at first, but, a threesome had always been a secret fantasy of mine. i truly enjoyed having sex with a woman and this seemed like a way to continue that honestly.

We didn’t jump into swinging immediately. We talked about it throughout the year we dated and the year we were first married. Close to our first anniversary, i discovered that he had been perusing swinger sites, which bothered me, although it did not appear that he had met with anyone. i decided that i didn’t want him to have a sexual affair (note, our sex life was fantastic, so that wasn’t an issue) and suggested to him that maybe we should try a swinger’s site out (i never divulged that i had discovered his secret). We set up a profile and had our first swingers’ date with another couple on our first wedding anniversary!

Our first date was phenomenal! i had no idea what to expect, and neither did my husband. We met this couple at a great pub, had drinks and dinner, hit it off well, and they asked if we wanted to go back to their place to play. So we did! And it was awesome! We were hooked. We went on more dates, started going to a local swingers club, and connected with a group that i still play with today–the group where i, in fact, met Maximus. We never played separately, that i’m aware of, but i have a feeling that i am incorrect in that statement! Our swinging did not break us up, in fact, it was the strongest part of our relationship, but it couldn’t hold us together.

It was a great journey. i never met other swingers the way Bruce and Susan did. If we did, they certainly did not divulge their lifestyle. i do know that i am much like Trina now, that i love to be edgy and provocative with vanilla to see what bites, but really not as forthright or assertive with them as she was when she had Susan over for their Fourth of July party. Part of the reason is that i really do not like to teach people how to be swingers and hate the risk of drama from someone or couples freaking out about the lifestyle in the middle of things. And, i like to keep my privacy about my lifestyle and separate my kink from my vanilla friends.

But i’m never going back to vanilla! i moved to Swingtown and am  never moving away!