Getting Pissy and Let me Stay

The first part of this post is about golden showers. While this is an adult-only site, i realize not everybody is into water sports, so if you’re not, just skip down to the section, Let me Stay.

Maximus adores piss play. One of the things He loves about us is that He gets to fulfill every one of His fantasies with me, including those that He’d never been able to pursue, let alone tell anyone about. His water sport experiences have been limited to peeing on women while showering with them, completely unbeknownst to His bathing guest. Until me. Maximus has pissed on my body, sides of my face, my pussy, in my ass with a funnel, and had me piss all over Him and into His mouth. He loves it. He’s not urinated in my mouth, but has been working me up to that.

A few days after my last rage, three weeks ago, Maximus texted, somewhat in jest, “I guess now I can piss directly in your face and mouth now. Kinda like a get out of jail free card. Hehe.” i replied, “Ok, i’ll do anything. i’ll do whatever it takes to earn Your trust back.” So i knew my trip up this weekend would include this scene. He shared with me the details of when and where so i’d be prepared.

Maximus picked me up at the airport and we went directly to Swimmer Guy’s home on Lake Sammamish. He led me to the beach house and instructed me to undress and kneel for Him in the shower, but with my head tipped back and mouth open. i was quaking inside, but i trust Maximus and had given Him my word, yes, redundant as He has my bond. Maximus stripped and entered the shower with a raging erection. He face fucked me and then stood over me and had me wait as He worked to ease the hard-on to urinate. And then it started, first splashing on my chest and then into my face and mouth, warm, streaming, Maximus groaning in ecstasy! And it wasn’t bad at all, in fact, it was quite enjoyable!

i’d purposely not used the restroom after landing at the airport and my full bladder was about to explode. It was especially hard to hold it while He was peeing on me. i begged Maximus to allow me to pee on Him. He pulled me up and had me squat over Him and i emptied myself all over His face and body, watching Him spit my piss like a fountain, emptying His mouth over and over. He then shoved me forward and slammed His cock into my pussy, pulling my piss soaked hair. He alternated fucking my pussy and my mouth and finally came all over my face and breasts.

Maximus was in heaven!

It had been nearly a month since Maximus and i had been together, the longest time apart since August, where we vowed to never be apart that long ever again. Obviously, we needed this time apart, but we were really wanting and needing each other emotionally, physically, and sexually. We had each other when we returned home from swimming and then again that night when we went to bed.

The Englishman is living at Maximus’ right now for a while, so i figured we would not get too crazy with our scenes, although he is fairly used to hearing Maximus and us through the bedroom door. Once in the privacy of our room, i brought my collar to Maximus, knelt in front of Him on the bed, and held my hair up so he could collar me. i was nearly in tears over this, especially hearing Him say, “Oh yes,” when i presented it to Him. Maximus took me, just His body, no toys, no rope, no bondage. He grabbed my collar and pulled me toward Him, pushed me where He wanted me, grabbed handfuls of my hair and breasts. And He started finger fucking my mouth, one finger, then two, then three, then four…pulling me up to straddle Him while He did this, holding me with the collar, demanding that i not swallow, but let my oral juices pour all over Him.

i honestly don’t remember a lot of what happened. i was just in such bliss to let Him use and enjoy my body in whatever manner He wanted and needed. i needed to submit to Him. At some point, His hands entered my vagina and into my G spot and i zoomed into subspace. i was flying, ecstatic, entranced by His carnal consumption of me, and i didn’t want to leave. i was outside of my body, not watching though, i was soaring through the heavens. i started to hear Maximus calling me back, asking me to come back to His safety. i didn’t want to leave, i wanted to stay, i wanted to soar for Him, wanted the waves of subspace to wash over me again and again, but i could hear Maximus begging me to come back to Him and He sounded concerned–i knew it was selfish of me to continue and He was worried. i was sobbing when i returned. Maximus cradled me, stroked my hair and face, wiped my tears and held me. He told me how beautiful and amazing i was and that i was safe. He wrapped His body around mine and we slept entwined, finally crashed into each other after such a long emotional break.

In the morning, Maximus described what He saw and heard. He had never seen anyone orgasm continuously for so long and that it appeared that i was convulsing. Tears streamed down my face and i howled, sounds He’d never heard from me before. He was both amazed and concerned for me and concerned too about The Englishman hearing this through the door! The difficulty in getting me out of subspace was concerning for Him–He said it was like a balloon or something slippery that He’d grab and would have slip out of His grasp to chase after again. And it was the same for me–it was like being a little girl running, giggling around a garden with someone calling out after me to stop, also giggling, like a game. Like being called in for dinner when all you want to do is keep playing.

The Englishman was amazed in the morning. He hadn’t been sure whether the sounds were good or bad–just something he’d never heard before.

It was an amazing experience for me and Maximus. i believe the intensity was not from sex or pain, but from the sheer emotional release of being back with Maximus, being in His arms, being treasured, and it sent me soaring.

Thank you Maximus for sending me there, for treasuring me, for our bliss. i love and adore You. GOT

This past weekend marked a first anniversary for us, Maximus and me. One year ago, i came up to Seattle for a race, asked if i could see Him while i was there, and Maximus asked me to stay with Him. i did stay with Maximus, for four wonderful days, the start of a wonderful relationship neither of us saw coming.

i was feeling much more nostalgic about this anniversary than i expected, and was surprised just how nostalgic Maximus was about it as well. i arrived to find a gorgeous pair of Brian Atwood iridescent black stilettos in my dresser drawer, along with love notes tucked in amongst all my clothing, shoes, vanity. We went out to ran some errands and Maximus brought me to the Coach store to pick out something i’d like and i chose a new coin purse/business card holder to go with the purse and wallet He gave me for Christmas.

That night Maximus opened a bottle of Gloria Ferrer champagne and toasted us. We sipped the champagne and worked on our schedules for the next month as several things had come up for Maximus and we needed to make some adjustments.

Neither of us can remember exactly how what happened next started, what was said to get things going, but something was said during our calendar discussions, by one of us, that made me decide i needed to get up from my seat at the table and kneel at His feet. Maximus reached down and noticed i was still wearing a bra, which was against the rules for the time of night it was, an hour after the 6 o’clock deadline. He pulled my blouse off over my head, removed my bra, pinched my nipples and i apologized for not removing my bra earlier due to my distraction with our calendars (i’d also thought it was a 6:30 deadline too, but that was beside the point). Maximus pulled down His jeans and i proceeded to suck His cock greedily, taking Him deep into my throat.

Maximus then stood and removed His clothing. He pushed me backward supine on the hardwood kitchen floor and pulled off my jeans and panties. Pausing, He took my new black lace panties He’d given me for Valentine’s and brought them to His face, pressing them into His nose and inhaling deeply. He’d come in my pussy before we’d run our errands and had me pull my panties back on with my pussy full of our co-mingled come and it had leaked all over my panties. He pressed the lace into my nose to share. 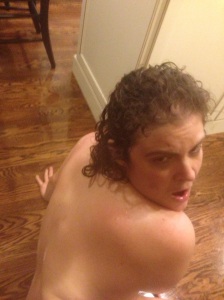 Maximus had told me earlier that He had planned a scene that included making me squirt into my face. He pushed my legs up over my head in a position like in yoga and began pounding my G-spot with His fingers and my come started spraying all over my body, face, into my eyes and mouth. He did this over and over, saturating my hair, my come pouring off my body in rivulets, pooling all around me on the hardwood floor. My juices seeped beneath me and soon i was gliding over the surface of the floor, floating on a sea of come, sliding around like a slip-n-slide! It was delicious! Maximus pushed and pulled me all over the floor during His play…it was an amazing feeling, gliding across the floor at His whim! To add to the wetness, Maximus stood above me for a golden shower, making our play even more slippery.

When we were done, i found myself completely spent and completely saturated. our fluids streamed out of my hair as if i’d just walked out of a shower. my body was soaked. We giggled and marveled at ourselves as Maximus mopped up the floor with towels, wrapped me in a bathrobe, and led me into the shower for a thorough washdown.

What an amazing night!