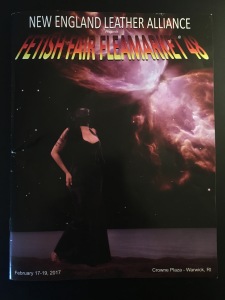 Wow! Maximus and i had an amazing week–it was really hedonistic! Maximus took the whole week off (except one morning of work), which is sooooo rare and a treat for me, we explored together, saw great shows, went to vegan restaurants where we had the complete and rare joy of being able to order ANYTHING AND EVERYTHING off a menu, and spent wonderful times with special friends, being completely ourselves!

As i’d mentioned, several of our D/s friends had encouraged us to join them at the Fetish Fair Fleamarket in Rhode Island, February 17-19, so we bought tickets and made plans for that, which was exciting enough! But, we managed to get tickets to Hamilton in New York City for Valentine’s Day, so our Fetish Fair Fleamarket trip got extended into a full-blown week-long vacation. We got home yesterday and i’m still not quite back into normal life mode!

View from The View

We have a time share and stayed in a beautiful suite right off Times Square between the Hudson Theatre and the Belasco Theatre. We couldn’t have asked for a better location–right in the heart of the theatre district! We wandered around the first afternoon, took in the sights. We had drinks and watched the sunset from The View at the top of the Marriott Marquis before heading to one of the top vegan restaurants in the country–Candle 79.

Tuesday, we jumped onto the Hop on Hop off bus and took a tour uptown. We love to start trips in big cities all over the world with the Hop on Hop off bus tours because we get a great overview of the city, learn some history, and figure out areas we want to come back to for more exploring. We hopped off at Central Park for some lunch, shopping at Bloomingdale’s, and walked back to our hotel. Then…the highlight of our NYC trip–Hamilton!

Hamilton was amazing! We have read Ron Chernow’s book, Alexander Hamilton, that inspired Lin-Manuel Miranda to write the screenplay, have listened to the soundtrack thousands of times and know the music by heart, have watched the documentary Hamilton’s America on PBS’ Great Performances and were shocked at how overwhelmed and blown away we were watching the show live in New York. Both Maximus and i were moved to tears and that 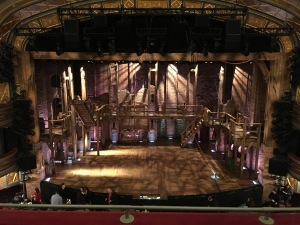 totally surprised both of us. We loved our seats, which were dead center in the front mezzanine, fourth row, as we could see everything. (Many have asked us how we got tickets–i got them through Vivid Seats, which i wholeheartedly recommend! i also checked A View From My Seat to check which seats were good and which had obstructed views or other issues before i purchased them.) It was an experience of a lifetime, and if we could have gone the next night–we would have in a heartbeat! We capped off the night with sushi and cocktails.

Maximus had to work Wednesday morning, so i went to the gym and just chilled until He was free. We took the subway to the Flatiron District for lunch before going to the Museum of Sex. The museum wasn’t what i expected–i expected more.  There were some displays abou

t the sex club history of New York, artifacts through the ages, and exhibitions on animal sexuality, erotica through history, and erotic art, but it didn’t seem particularly in-depth to us. i did complete an online sex survey while at the museum and will share about that and the results in another post. Afterward we took another Hop on Hop off tour, this time of downtown, before heading to an early dinner at another vegan restaurant, Blossom on Columbus. Why the early dinner? Because we got tickets to see the sold out Dita Von Teese show that night (thanks again to Vivid Seats)!!

Dita’s show, The Art of the Teese, was so much fun! The show was great, but the venue and happenings there were the best! We were in the middle of NYC 20-30 year-olds, sexually vibrant, electronically-connected, dressed in their finest objectified 1950s wear, party! It was a Grinder/Tinder hookup mecca and so much fun to voyeur! The MC was Mr. Murray Hill, who was hysterical, terrifically inappropriate, and made the show! Dita was gorgeous and sexy, doing four sets in between sets of several other burlesque performers she’d selected.

Thursday was quite a day. We had tickets first thing in the morning for the Statue of Liberty and Ellis Island. We’d wanted to go Wednesday, when the weather was nicer, but we didn’t think we’d have enough time having to start late after Maximus’ work requirements were done, so we braved 34 degrees and 30 mph winds! It takes a long time to pick up your tickets, wait to go through security, wait for the ferry, etc. and it’s all outside. So while we had 9 AM tickets, we stood out in the cold from 8 AM to 9:45 just to get onto Liberty Island–but it was worth it. The museum inside the pedestal of the Statue of Liberty is great–we learned so much! We went to Ellis Island next, which is AMAZING! There is so much to see and learn there and we will go again just to spend an entire day at Ellis Island. We wanted to go on a hard-hat tour and see the other buildings under restoration after Hurricane Sandy, but we didn’t have enough time. We left Ellis Island for lunch and then went to the 911 Memorial and Museum. The 911 Memorial and Museum is very well done and it is emotional. The whole day was moving and emotionally draining. We ended the day at Hangawi, an amazing vegan Korean restaurant in the Korean District that we were lucky enough to get reservations for this week.

Friday we made our way to Warwick, Rhode Island for the Fetish Fair Fleamarket. There were three other couples in our group at the “Flea” and we were so, so, so looking forward to seeing them again and spending more time together. i’m going to post more about this part of the trip in separate entries, as there is a lot to talk about. But it was so great!

We got home yesterday and i am still wiped out! It’s a good wiped out, though, having had such an amazing week. i was so tired last night that while i’d set things out to make dinner, i couldn’t function enough to actually do it. Maximus excused me from my normal duties, sent me to bed, and made Himself something to eat! i still need to unpack!