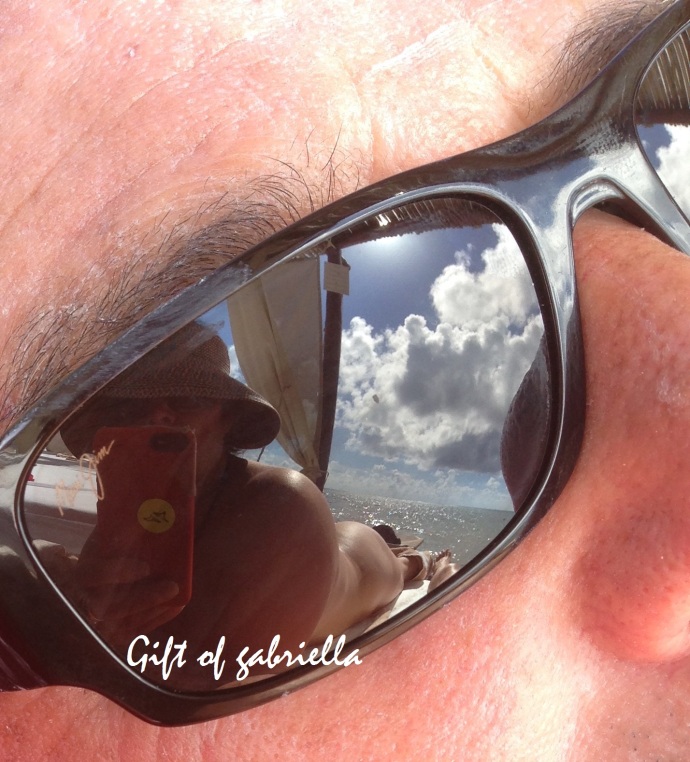 However, shortly after we arrived, we realized there were a lot more kinky people at the Life on the Swingset Desire takeover this year! And we wished we’d brought our kinky toys. Not only were there kinksters, but several more people in D/s or M/s dynamics. This was exciting for us, as we wanted to talk to others about their dynamic and learn from them about their protocols, rules, et cetera. J.V. and Shara of Ending the Sexual Dark Age were there, as well as an M/s couple from California who manage a dungeon. Our friends from the last year, Eagle Scout and Mmmm, who we thought had a D/s dynamic, were actually going to be doing one of the flogging demonstrations with J.V.! Wow, had we underestimated the group this year!

There were several kink events. J.V. and Shara hosted several munches, and quite a few people attended. There was a kinky toy show-and-tell after the vanilla toy show-and-tell, and that was the first time we really realized we had made a mistake in not bringing our kink bag. And then there was the flogging demonstration and a kink salon hosted by J.V. and Shara.

The flogging demonstration was wonderful. J.V. discussed dungeon etiquette, consent, RISK and SSC, and types of floggers. But as soon as i walked in, i could hear jingling rings of collars worn by Mmmm and LodiPet, and my mood immediately dropped–i missed my collar. It was the same reaction i had when i went to Venus in Fur with AwesomeA, that sound triggers something in me. Eagle Scout demonstrated Florentine flogging on Mmmm which was beautiful to watch, and then J.V. flogged Ginger from the Swingset crew.

We did win a raffle prize–a gorgeous leather rose flogger. It really is

beautiful, so much so that i thought it wasn’t one of the options to choose from at the prize table! We’ve not used it yet, but i’m sure it will lead to a journal posting once we do.

Maximus was very interested in learning new flogging techniques from Eagle Scout. We had a great connection with him and Mmmm last year and this year picked right up where we left off. Maximus and i had discussed having Eagle Scout flog me and we’d also discussed this with Mmmm and Eagle Scout, to which they had also expressed interest.

We had a chance to do this at J.V. and Shara’s salon. The four of us were the first to arrive, giving us enough space to do this in their suite. i leaned forward, holding onto a ledge while Eagle Scout performed Florentine flogging while explaining it to Maximus. He offered Maximus an opportunity to try it out, but He’d had a few drinks and did not feel comfortable trying it under that condition. i was surprised, the flogging got fairly intense for me quite quickly. i knew from the demonstration earlier that he wasn’t even close to mid-steam. It seemed like the flogger was hitting in the same places at the lateral ends on my outer thighs, and i had to use my yellow safeword. Eagle Scout was surprised as well, as my skin hadn’t even gotten reddened or warm. After discussing it with Eagle Scout, Maximus and i both realized that we’d not done a lot of work on my backside other than short sequences of flogging, spanking, and the crop. The majority of the work has been on my breasts. Learning this, Eagle Scout did some flogging on my breasts, and while he was concerned about going too strong, it was barely registering on me and i wished he’d done more. Turns out he’d done very little breast flogging and was very nervous about it. i’d like more!

Maximus took me to the bed after the flogging and applied the nipple suction tubes. People were very intrigued. He worked them for about 45 minutes, pulling my nipples over an inch. We walked around and socialized, talked about the nipple suction and the nipple play that Maximus does, including pinching until i orgasm, nipple clamps with and without weights, clothes pins, and striking my clamped breasts with the crop. He removed the tubes, which didn’t have a lot of orgasmic or painful response since they’d not been on too long. Shara brought me over a towel and wrapped it around my shoulders and thanked me for sharing our scene, sharing that she could not have endured such nipple play. i was so surprised. i was truly honored that she thanked me for our scene, i was just humbled by her and her words. Several others, including Mmmm, LodiPet, and Ginger also expressed that they could not imagine such play. i realized that Maximus had succeeded in nipple and breast torture training of me, giving me great endurance. He noted, however, that it was obviously time to do similar training to my backside…

We learned a valuable lesson this year at Desire. We learned how important it is to be our authentic selves. Fear, and really, irrational fear, lead us to not bringing tools that allow us to fully express ourselves, and because of that, we missed out on some things that truly give us pleasure. i missed my collar and cuffs–i am so proud of them and what they represent, and i felt their absence. We will bring our complement of BDSM equipment next year, even if that means checking a third bag. We are among friends, among peers, among fellow kinksters. We are who we are, and although some people may not understand it, there are many who will and many who appreciate authenticity.

2 thoughts on “Reflections on Desire, Part 3”