Wounded Birds, Don’t be a Douche, Playing Together, and Red Bottoms

Gosh it’s been a while since i blogged! Nothing’s wrong, in fact things are going great! We’ve not had much playtime recently, as the last time i was up with Him, my mom came with, and while the jokes between us about mom are hilarious…there’s NO WAY we’re going there!!

i had a surprise vacation day last weekend so headed back up and Maximus took me to a Seahawks game (He has season tickets). What a blast! i’d never gone to a NFL game before and it was super fun. We’re hoping to do that again.

On the way home from the game, we started talking about Maximus and The Englishman going out the other night and meeting vanilla chicks at a bar. Maximus shared that they had met two women and one hit it off with The Englishman (i knew about this as he texted me about it and i was encouraging The Englishman to pursue it, to start dating again) and that the other woman, a widow whose husband had died six months ago, had given Maximus her email address. He shared that nothing happened, and that in the past He would have encouraged both women to come to His place, having every intention to fuck one of them and setting up the scene for The Englishman to fuck the other one. He then added, “But I didn’t want to do that. Is there something wrong with Me?” i was taken back by this, as we have talked at length about Maximus staying away from vanilla women due to the drama it causes (vanilla women equate sex with love and Maximus fucking them has led to problems with women becoming attached and upset). We started talking about this history, but i was tired and getting irritated that we were going to have this discussion yet again, so didn’t get too deep into it. When we got home, i noticed that this woman’s business card with her personal email address written on it was set out on His buffet when we walked in (Maximus had picked me up at the train station before the game, so i hadn’t been to His house yet), and it frustrated me that He had kept it and had it so prominently displayed, as if to remind Himself to contact her. i asked Him why He still had it if He had no intention of contacting her and why it was set out like that. He mentioned that He’d no intention of contacting her, so i asked Him to dispose of it, shred it, which He did.

We had intended to have some playtime when we got home from the game, since it’d been so long, and i was frustrated that this discussion and finding the card was irritating me so much. i decided it was enough, a discussion for another time; i went upstairs, removed my clothing, knelt at the end of the bed with the crop over my thighs, and took myself into a state of calming submission while i waited for Maximus. It was the right decision.

We had a race early the next morning and things to do before our planned drive back down to my place. i thought about how to bring up this discussion again. i decided that during our drive i would suggest doing some brainstorming on our Relationship Vision assignment from Fern and bring it up then. Interestingly, Maximus brought the topic up when we started our trip! 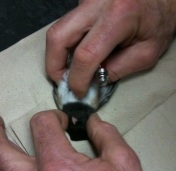 When i was processing my feelings and our relationship after the last raging episode, one of the things i thought about was how Maximus responds to attention from women–it’s like a drug, an endorphin rush. Don’t get me wrong, i don’t despise this, it’s something i’ve known about Maximus all along, but i feel that this rush makes it difficult for Him to not get involved in or encourage situations that cause conflict for Him and us. Moreover, Maximus is extremely tenderhearted and has a penchant for what i call Wounded Birds, people who are down on their luck, emotionally wounded, and in need of rescuing. More often than not, the wounded birds are women, such as Ms. W, LeLe, Nancy, Z Baby, PoodleS, but The Englishman is a wounded bird as well. These people attract His attention and give Him a great deal of appreciative attention back, and Maximus derives a great deal of self-worth from that.

Maximus started the conversation about being at the bar with The Englishman. We talked about the drama that comes from hooking up with vanilla chicks and particularly Wounded Birds, as this woman, a recent widow, most certainly was. i shared with Him how i had spent time thinking about His response to women’s attentions and had wanted to talk about it with Him. He most certainly agreed with my assessment, that He does get a rush from that, to the point where it blinds Him (such was the case when we met a swinging couple in Hawaii that i did not care for, but He did not even pick up on my overt signals about because He was so taken by the woman’s desire to be with Him).

Don’t be a Douche 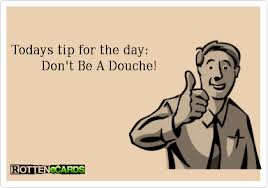 “But i would tell her that i have a girlfriend, if she wanted to get attached, that would fix that!” Maximus continued.

“No,” i replied, “that would be extremely hurtful, to her and to The Englishman. First, You haven’t told her You have a girlfriend, so she’s seeing You under the vanilla pretext that You are interested in her. Second, when You reveal that You have a girlfriend after going out with her, and probably fucking her too, You become the biggest jerk around and in turn, You damage The Englishman’s credibility with the girl He’s dating because He knows You have a girlfriend and therefore that shows that He encourages cheating, thus making Him a jerk. You aren’t helping anyone by doing that.”

“I hadn’t thought of it that way,” Maximus replied.

i shared with Maximus that it is frustrating to me that He continues to encourage relationships with vanilla women because it brings us conflict. And i clarified that it wasn’t that i had conflict that He saw other women, but giving vanilla women the impression that He was interested in them brought their drama and conflict into our Relationship. We talked about several women who He texts.

“I’m just being nice to them. My mother taught me to be nice. They text, I answer,” Maximus shared.

“But it’s not nice…You’re leading them on, and that’s not nice. That’s mean and really, quite douchey,“i replied. We talked about how women interpret continued interest from a man and what that means to them.

“I see that I’m really not being nice by doing that, that I’m leading them on. My mother would be very angry that I was being a douche!”

The discussion then turned to a specific woman who Maximus texts, Miss H, who He does not wish to ever get together with again, for several reasons. Recently, she asked if He was going to be in her state again for business and He replied when He’d be there, and of course, she wants to get together with Him. i asked why He even divulged that information with her if He had no interest in getting together with her. Again, He thought He was being nice and not understanding her intent in inquiring about His travels.

The conversation turned to swinging. As Maximus had noted, He no longer had any interest in vanilla dating, and when He thought about it, He had no interest in lifestyle dating either. This was a surprise to me. i shared that i had not had swinging dates for several months, had just lost interest in it, because i preferred to do that with Him. i went on to say that there was a certain level of jealousy when He was lifestyle dating, not that i was jealous of other women, but that i was jealous that He was playing and i wasn’t there to watch, hear, or participate!

“Oh My God! Thank you so much for sharing that!” Maximus responded, “that makes so much sense to Me!” i think Maximus felt i was jealous, but assumed i was jealous of the women, not that i was not playing too.

After more discussion, Maximus shared that He no longer wanted to swing separately, and i agreed. We have turned off our single profiles and updated our couple profiles accordingly. 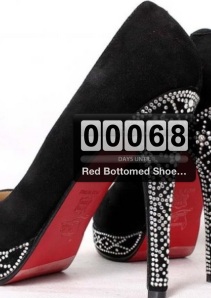 nked Maximus for our conversation and shared that i’d wanted to have this talk on the way down too. i also shared how i had felt after the football game, the frustration and irritation and how i had chosen to submit rather than getting angry, using it as a time to focus on the positive in us. While explaining this, i shared that i was proud that i hadn’t let that be a trigger to raging, and this surprised Him, that i could’ve raged with that. i had a hard time explaining that i probably wouldn’t have raged, but in the past, i could’ve been triggered by that, but that i had employed techniques to not get angry.

The next day, Maximus proposed that if we could go 100 days from the last raging event without me raging (actually, it was if i could go 100 days without raging, to which i clarified it was a joint responsibility and He revised the statement), He would buy me a pair of Christian Louboutin red bottomed stilettos! This is a reward for both of us, first, that He gets to buy something extravagant without me balking about it, second, that i get something special i’ve only ever dreamt about, and third, that He gets to see me wear a pair of these spectacular shoes!

So the countdown is on…actually already started over a month ago. And it’s kinda like taking candy from a baby…our raging days are over.

And…newsflash! We are going to Paris in October…the birthplace of Christian Louboutin shoes!